The more transmissible SARS-CoV-2 variants B117, B1351 and P1 are now dominant in England (B117), South Africa (B1351) and Amazonia (P1). Data from the UK, Denmark, Belgium and Switzerland show that B117 replaces previously dominating strains in a predictable manner, progressing from 20% to 80% in 4 weeks (Figure 1). After another few weeks of enhanced transmission, new epidemic waves might build as early as mid-March. In most of continental Europe and the US, Easter 2021 (4 April) may be recalled later as a B117 Easter. While ‘hard’ lockdowns are apt at controlling the new variants (see below: UK, Ireland, South Africa), ‘soft’ lockdowns may not be sufficient (Figure 2). 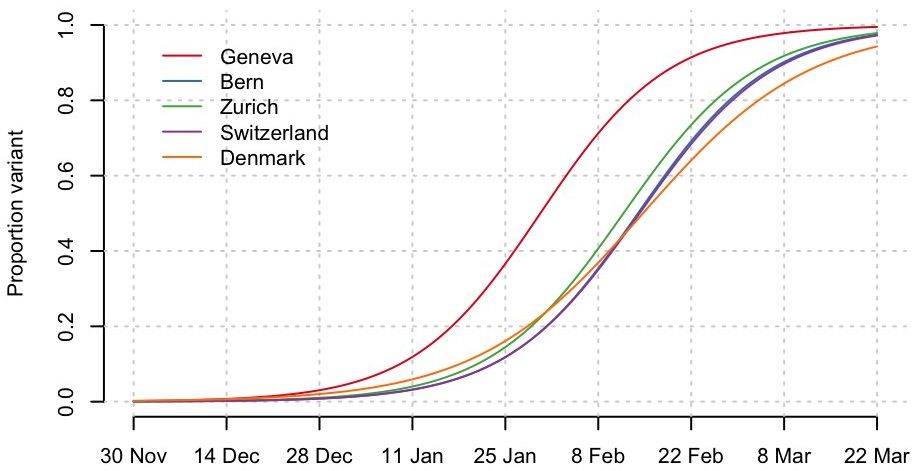 Figure 1. The proportion of B117 among confirmed SARS-CoV-2 case increases at a similar pace in different regions of Switzerland. Geneva appears to be around two weeks ahead of the rest of Switzerland. Source and copyright: Christian Althaus, https://twitter.com/C_Althaus/status/1360177933155983361.

B117, B1351 and P1 escape natural or vaccine-acquired immunity to different degrees (see page 21). B1351 and P1 are also partly or totally resistant against some monoclonal antibodies (page 25).

Figure 2. March to May 2021. Possible scenarios for national epidemics. Blue: new SARS-CoV-2 infections due to old variants; red: new SARS-CoV-2 infections due to new variants. On the left, mitigation measures succeed in keeping case numbers low until the general availability of vaccines for the adult population. On the left, an uncontrolled epidemic is fuelled by the higher transmissibility of new SARS-CoV-2 variants. Graphic copyright: Süddeutsche Zeitung, 5 February (Berndt 2021).

The daily top papers grouped by topic (updated every Wednesday):

Manage Cookie Consent
To provide the best experiences, we use technologies like cookies to store and/or access device information. Consenting to these technologies will allow us to process data such as browsing behaviour or unique IDs on this site. Not consenting or withdrawing consent, may adversely affect certain features and functions.
Manage options Manage services Manage vendors Read more about these purposes
View preferences
{title} {title} {title}